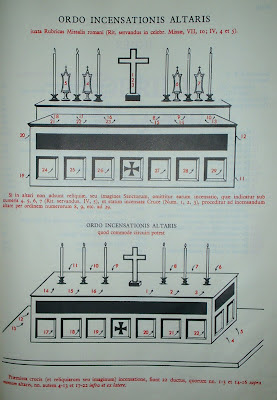 (The Order of Incensing from a Mame MR1962)
This series of posts will look at the 1962 editions of the Missale Romanum and the rite contained therein and consider how it relates to both what preceded it and what followed. Indeed, as we shall see, the 1962 editions of the Roman Missal were not in use for very long in their entirety with the Ordo Missae, and much else changed within two years of the SRC claiming that the 23rd June 1962 edition of the MR was typical.

Firstly, the actual layout of the Missal and its contents will be considered. The next few posts will look at the changes contained in this edition of the MR and finally its place in the history of the Roman rite will be considered.

Opening a copy of MR1962 following the title page Quo primum and the derogatory bulls of Clement VIII and Urban VIII follow as in previous editions. The text of Divino afflatu is omitted. Next appears the General Decree of the SRC, Novum rubricarum, that promulgated the new set of rubrics that came into force on January 1st, 1961. Following this are the new Rubrics of the Breviary and Roman Missal beginning with the 'General Rubrics'. The paragraphs of these rubrics are all numbered sequentially as are those found in the 1970MR and its subsequent editions.  After the 137 General Rubrics the Breviary Rubrics are, sensibly, omitted and the Rubricae Generales Missalis Romani then follow beginning with #269 and ending with #530. Then is placed De Anno et Ejus Partibus followed by the Paschal tables and the Calendar. The Ritus servandus is next (its contents will be discussed later) with De Defectibus following. Penultimately, before the Temporale are placed the various prayers of preparation for the celebration and then those of thanksgiving after Mass. Lastly there are the illustrations for the censing of the oblations and the altar followed (in my Mame copy at least) by an index of the above. Of note, and the photograph above, MR1962 shows for the first time how to cense a free-standing altar. 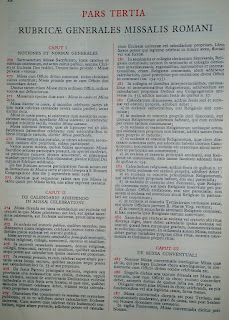 (The 1962 'General Rubrics' of the Missal)
In immediately previous editions (I have used a 1952 Marietti travelling edition of the Missal in my collection for comparison) after Divino afflatu came De Anno et Ejus Partibus followed by the Paschal tables and Calendar then Rubricae generales Missalis (the old General Rubrics, quite unlike the new, arranged in twenty chapters), then Additiones et Variationes followed by the Ritus servandus, De defectibus and the prayers of preparation and thanksgiving. 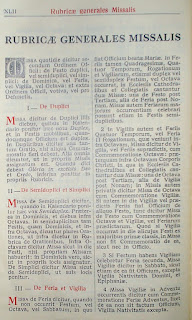 (The previous 'General Rubrics of the Missal' - essentially unchanged from 1634 apart from a light edit in 1900)
Posted by Rubricarius at 18:03

Is this rearrangement for greater convenience, mere fussing about, or something more sinister?

I assume that free-standing altars were incensed as those against a wall prior to '62.

It's interesting to consider why this addition was made. Was it a preparation for Mass facing the people, or a result of some priests already using that innovation?

Jack B. - versus populum celebrations were popular amongst the more progressive elements in the Liturgical Movement through the 1950s. It was seen as a return to ancient practice or the 'basilican position'.

Rubricarius,
Bravo! Thank you for this series. One curious omission from the free-standing altar diagram: there is no indication for censing the altar crucifix. Presumably it was censed in the traditional manner (as would be the reliquaries).
--Fr. Capreolus

I find it unsettling that the Cross/Crucifix is ignored when censing a freestanding altar. Am I to assume that Christ's sacrifice on Calvary is no longer important? That Crosses and Crucifixes were done away with it for a while in the 1970's at ad populum worship is even more unsettling.

One curious omission from the free-standing altar diagram: there is no indication for censing the altar crucifix.

What is interesting is the omission of the numbers '1, 2 & 3' in the lower diagram. As Caeremonarius states the rubric is clear enough but why the difference? I suspect that most versus populum altars/tables of the period did not actually have a Cross on them and the arrangement was the same as in the photograph in Ellard's 'Men at Work at Worship'.

Dear Rubricarius & Caeremonarius,
Thank you for the clarification. I didn't have a 1962 Missal handy to check it easily myself. (I gave it away quite a while ago ... to someone who would use it more than I would.)
Best regards,
Fr. Capreolus