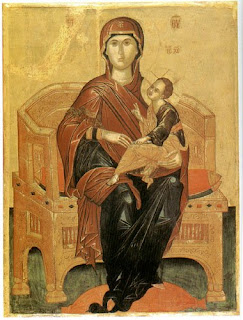 As today there is no occuring semi-double, or higher ranking feast, today is celebrated the Saturday Office of the Blessed Virgin. The rite is simple. and the liturgical colour is white.

At Mattins the invitatory was Ave Maria, gratia plena, Dominus tecum and the Office hymn Quem terra pontus sidera. The antiphons and psalms of the nocturn are from the Psalter for Saturday. The first and second lessons were from Scripture occurring, the Epistle to the Corinthians, and the third lesson is proper to the month of January, De via perversitatis. The Te Deum is sung. At Lauds the antipons and psalms are of the Saturday, the Office hymn is O gloriosa Virginum. After the collect of the day commemorations were sung of SS Marius and Others and St. Canute. The commemorations were followed by the special form of the Suffrage of the Saints used on feasts of the BVM.

Mass is of the resumed Sunday within the Octave of the Epiphany. The liturgical colour is white. The Mass formulary is In excelso throno. The Gloria is sung the second collect is of the BVM, the third collect of SS Marius and Others, the fourth collect is of St. Canute. The preface is of the BVM with the verse Et te in Veneratione. Private Votive Masses are forbidden.

Vespers are of the second Sunday after the Epiphany with a colour change to green.  The Office hymn is Jam sol recedit igneus.  After the collect of the Sunday a commemoration is sung of SS Fabian and Sebastian.  At Compline the Dominical preces are omitted due to the concurring double feast.

In the 'liturgical books of 1962' the Suffrage was omitted at Laudes.  At Prime there are no Dominical preces. At the Hours the hymns have the ordinary tone and Doxology.  Mass is of the BVM with a single collect. The Mass of the resumed Sunday is ignored.  At Vespers there are no commemorations.
Posted by Rubricarius at 20:01

Is the Sunday Mass resumed, as opposed to the Mass of the BVM, because it was never said?—with the Octave of Epiphany on Sunday and the transfer of the Feast of the Holy Family to the previous Saturday

Yes. Saturday 19th is the only day it can be resumed. As it is a Suday within a privileged Octave private Votive Masses are not allowed - in contrast to an 'ordinary' Sunday.