The Blessing of the Waters

A fascinating book by the Lord Marquess of Bute, 'The Blessing of the Waters on the Eve of the Epiphany' is available online here and can be purchased at a little cost from Abebooks and other sources in facsimile form.

Lord Bute gives first the traditional Roman form which took place after the Te Deum of Mattins. It is a most elaborate service consisting of numerous pericopes, collects, a preface, Sanctus, Pater noster, Libera nos etc along with intervening chants. The climax of the service is the Cross being plunged into the waters three times. This service was supressed in 1890.

Along with giving this service in Latin and English Lord Bute gives the service as found in other traditions such as the Greek, Russian and Syriac. He also gives the text of the new service from 1890. His introductory words are noteworthy: 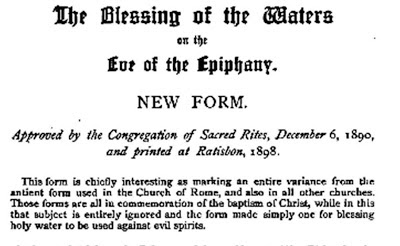 Do read the book and buy a copy - it is well worth it.

We happily had this in my Byzantine parish today for the Theophany of the Lord.

Sorry to be a ghost at the financial feast (or maybe a help) but it can be downloaded and printed for nothing. I can't remember how exactly, but I know it can be done. Alan Robinson

Thank you for this, Rubricarius! I've looked over the first few pages, a little sad that it was seen fit to suppress (or "modify") this ancient ceremony.

All the best to you and your labors for Epiphanytide,

I don't think the free PDF is any longer available - but I might be wrong.