The Annunciation of the BVM 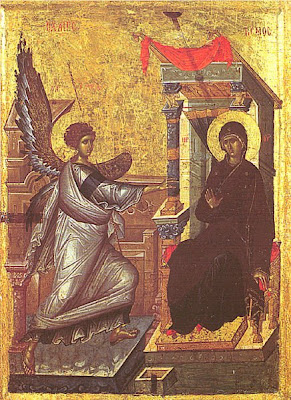 The great feast of the Annunciation is a double of the first class. The feast was celebrated as New Year in England and some other places in times past. The Office is proper.

At Mattins the invitatory is the Angelic Salutation Ave Maria gratia plena; Dominus tecum. The antiphons are taken from the common along with the psalms. The ninth antiphon is proper and the familiar Angelus Domini nuntiavit Mariae, et concepit de Spiritu Sancto. In the first nocturn the lessons are taken from Isiah and are particulary beautiful.

Behold a Virgin shall conceive and bear a son and his name shall be called Emmanuel. He shall eat butter and honey, that he may know to refuse the evil, and to choose the good.

And there shall come forth a rod out of the root of Jesse, and a flower shall rise up out of his root.

And that which was dry land shall become a pool, and the thirsty land springs of water.

The responses are proper to the feast. The ninth lesson is of the Lenten feria after which the Te Deum is sung. At Lauds the antiphons are those used at First Vespers and the Sunday psalms are sung. A commemoration is made of the Lenten feria. At the hours the antiphons of Lauds are used, at Prime festal psalms (53, 118(i) & 118(ii) are sung, in the short responsory the versicle is Qui natus es de Maria Virgine and the short lesson proper, Egredietur virga.

Mass is sung after Terce. The Gloria is sung, a commemoration made of the Lenten feria after the collect of the day. At Tract is sung after the Gradual. The Gospel is the account of the Annunciation by St. Luke, the Credo is sung, the preface is that of the BVM and the last Gospel is of the Lenten feria. During the singing of the Creed the celebrant and ministers kneel for the verse Et incarnatus est de Spiritu Sancto ex Maria Virgine: Et homo factus est.

Second Vespers follow Sext and None after Mass, the antiphons are the same as First Vespers and Lauds and a commemoration of the Lenten feria is made. Compline concludes the celebration.

As mentioned above in England today's feast used to be New Year's Day. The current 'tax year' still reflects this beginning on April 5th. In the Julian Calendar (which England used until 1752) there were then eleven days difference between the Gregorian and Julian Calendars hence March 25th was what became April 5th.

The Byzantine rite has a beautiful tropar for the feast (translation Hapgood):

Today is the crown of our salvation, and the manifestation of that mystery which is from everlasting: The Son of God becometh the son of a Virgin, and Gabriel announceth the glad tidings of grace. Wherefore let us also cry aloud with him unto the Birth-giver of God: Hail, thou that art full of grace, the Lord is with thee!

In 'the liturgical books of 1962' there is a relatively high concordance with the traditional liturgy however the Marian Doxology is omitted from hymns of Iambic metre and the standard Doxology used. At Prime the short lesson is feria, that for Lent, Quaerite Dominum. Of course the usual non-seasonal differences are present e.g. the duplication of antiphons at the Little Hours, bows to the missal being made instead of to the Cross, the rules regarding the position of the celebrant's hands, the omission of the 'mid voice' etc. but it would be tiresome to list these each time.

Art: An icon of the Annunciation from the Church of St Climent in Ohrid, Macedonia (first quarter of the 14th century) from Wikipedia.
Posted by Rubricarius at 07:01

Email ThisBlogThis!Share to TwitterShare to FacebookShare to Pinterest
Labels: Double I Class, Lent

Maybe you can answer my question. Why do we not commemorate the second vespers of Saint Gabriel the Archangel after the First Vespers of our Lady?

Because on a Primary Double of the First Class the only commemortions made at Vespers are of other doubles of the first and second class, Sundays etc.