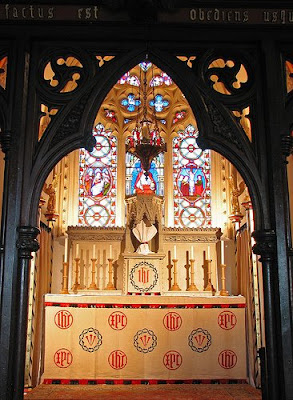 The photograph above shews the High Altar of the Church of St. Birinus at Dorchester upon Thames in Oxfordshire. St. Birinus is a small Victorian Catholic church built in the Gothic style. The altar is seen through the opening of the Rood Screen and is an example of the Northern European custom of Lenten Array. The photograph is from a series taken by a Br. Lawrence OP of St. Birinus. One many note the candles on the Riddle Posts that screen the altar and wonder at the incongruity of the row of six candlesticks.

Lenten Array is essentially the absence of colour. Mediaeval churches were richly decorated and a blaze of colour. For Lent this colour was literally hidden by the Array, an unbleached linen with stencils, usually of the Instruments of the Passion, in red, black and sometimes blue. Vestments too were 'Lenten White' or ash-coloured, ash being a derivative of black that was originally the Roman colour for Lent. 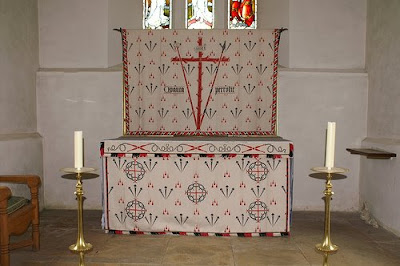 The above photograph is from a collection by Vitrearum and is of a Mediaeval (Anglican) Church in North Cerney, Gloucestershire. Both examples are probably a little over decorated and too colourful in themselves. Images too were veiled, from the beginning of Lent, with unbleached linen with usually a Cross in red stenciling or applique. Unveiling took place at the traditional point during the Sacred Triduum i.e. before Paschal Mattins. Lenten white vestments were changed to a very dark 'ox blood', a type of dark brown-red for Passiontide. This 'red' must not be confused with the red of martyrs which is in reality a completely different colour.

The Altar was partially hidden too by a veil, the great Lenten Veil, that also hid the Rood for Lent. This veil was generally lowered and removed during the singing of the Passion according to St. Matthew on Palm Sunday when the words "Et ecce velum templi scissum est in duas partes a summo usque deorsum" - And behold the veil of the temple was rent in twain from the top to the bottom. Herbert Thurston mentions the use of the Lenten Veil in scattered Continental churches up to 'modern' times.

The Roman practice of violet veilings from Passiontide appears to be of much later origin than Lenten Array and not universally adopted until the late eighteeth / early nineteenth century.
Posted by Rubricarius at 11:00

St Edmund's College,Old Hall, Ware [England's oldest Catholic school] uses a fine Lenten Array altar frontal on the "Forward altar" only used for Sunday Masses, made for Adrian Fortescue at Letchworth. It was disposed of - like most of the Fortescue vestments - and was rescued by St Edmund's. Alan Robinson

Thank you Mr. Robinson for that highly interesting information. Are we to understand that Dr. Fortesuce used Lenten Array at Letchworth? 'Lenten White' vestments?

Among the vestments which are in the possession of St Edmund's College now, I don't think that there is a special Lent set. The frontal might have been a "ferial" as opposed to a festal one. The Anglican Cathedral in Armagh - claiming the Early Irish Church as precedent had a Festal and Ferial frontal . Alan Robinson