St. Joseph Sponse of the BVM 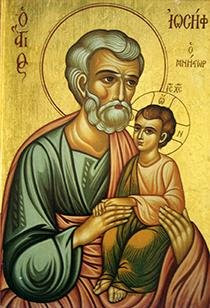 The feast of St. Joseph Sponse of the Blessed Virgin Mary is a double of the first class. The Office is proper.

The feast began with Vespers yesterday morning with proper antiphons and the psalms from the Common of Apostles in Paschatide (without, of course, the Alleluias). The hymn was Te Joseph celebrent agmina caelitum. A commemoration of the Lenten feria was made. At Mattins the invitatory is proper, the hymn Caelitum, Joseph decus atque nostrae. The antiphons are proper and the lessons in the first nocturn are from the Book of Genesis and the story of Joseph, using the Old Testament Joseph as a 'type' for St. Joseph. The second nocturn lessons are a sermon from St. Bernard and in the third nocturn a homily from St. Jerome on the first chapter of St. Matthew's Gospel. The ninth lesson is of the Lenten feria. The Te Deum is sung after the ninth lesson. At Lauds the antiphons are again proper and the Dominical psalms sung. A commemoration is made of the Lenten feria.

St. Joseph suffered much at the hands of the twentieth century reformers. Historically, the feast had appeared as a simple in the Universal Calendar in 1475. It was raised to a double by Innocent VIII. In the Tridentine Breviary (1568) it gained a new Office. Clement X raised the feast to a double of the second class in 1670. In 1714 the feast gained its proper antiphons, versices and its current first nocturn lessons. Pius IX raised the rank of the feast to that of a double of the first class on the 8th December 1870.

Pius X's Commission for Reform moved the feast to the Sunday after the 19th March and gave the feast an octave on the 2nd July 1911. Twenty-two days later, on the 24th July 1911, they removed the octave and returned the celebration of the feast to the 19th March. Two years later on the 28th October 1913 Pius X reduced the rank of the feast to a double of the second class. Benedict XV restored the feast to the rank of double of the first class in December 1917 and granted a proper preface in 1919. The later feast in Paschaltide, the Solemnity of St. Joseph (originally the Patronage of St. Joseph), shewed a similar history of development but, unlike the 19th March celebration, lacked the 'happy ending' and was shamefully cast aside, along with its octave, in 1955 by Pius XII. In 1948 it was suggested that the two feasts be fused and that the 19th March feast become known as 'S Joseph Sponsi BMV Confessoris et Ecclesiae universalis Patroni' (Memoria riforma sulla liturgica, #116, 4, p.111). The Solemnity of St. Joseph will be the subject of its own post in due course. The title of today's feast in the 1962 missal is S Joseph Sponsi BMV Confessoris et Ecclesiae universalis Patroni.
Posted by Rubricarius at 07:01

Email ThisBlogThis!Share to TwitterShare to FacebookShare to Pinterest
Labels: Double I Class, Lent