Laetare Sunday, the Fourth in Lent 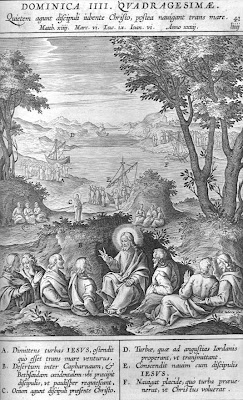 The Fourth Sunday of Lent is known as Laetare Sunday after the opening words of the Introit at its Mass Laetare, Jerusalem - Rejoice Jerusalem, and is also known as 'mid-Lent' Sunday and is also Mothering Sunday in many countries including the United Kingdom. It is another semi-double Sunday of the first class.

The distinguishing feature of this Sunday is the use of rose coloured vestments. Originally on this Sunday the pope gave a Golden Rose to monarchs and other rules. The link is for an excellent article on this practice in the Catholic Encyclopedia. From this practice the association of rose was made for the colour of vestments. The old Roman colour for Lent (the earliest Roman, as opposed to Gallican, colour sequence is mentioned by Innocent III) was black with the practice using lighter shades (i.e. purple-violet) on Sundays in some places. One suspects that the use of rose vestments grew from both of these practices. So the developed practice was to dress the altar after None yesterday morning with rose antipendia for Vespers of the Sunday. At Mass the deacon and subdeacon do not wear folded chasubles but dalmatic and tunicle. As folded chasubles are not worn the organ is played. Where rose vestments were not available the deacon and subdeacon wore violet dalmatic and tunicle as they done in Septuagesima.

Cardinals of the Court of Rome wore rose choir dress too on this Sunday along with the corresponding Gaudete Sunday in Advent. In Lent Cardinals wore their 'winter violet' cassock, mantelletum and mozzeta (not the violet watered silk of their 'summer violet). The 'winter' material was of merino but on Laetare Sunday they wore watered rose silk and, presumably, hoped for mild weather. An interesting photograph was posted on several blogs of Cardinal Pell's visit to see Cardinal Newman's room at the Birmingham Oratory. If one looks carefully Cardinal Newman's rose watered silk choir dress can be seen in about the middle of the rail. 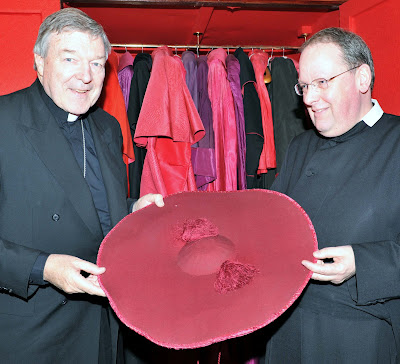 At Mattins the invitatory is, as previous Sundays of Lent, Non sit vobis and the hymn Ex more. The antiphons given in the Psalter for Sundays are used. As usual Mattins has three nocturns and nine lessons. In the first nocturn the lessons are from Exodus and the story of Moses and the Burning Bush. In the second nocturn they are from St. Basil the Great on fasting and in the third nocturn the lessons are a homily of St. Augustine on St. John's Gospel.

Mass is sung after Terce. The Gloria is not sung. The second collect is A cunctis, the third Omnipotens (for the Living and the Dead), a Tract is sung after the Gradual, the Credo is sung, the preface is of Lent and the dismissal Benedicamus Domino. As noted above the organ is played and the altar may be decorated with flowers.

Vespers are of the Sunday (sung at the normal time). The antiphons and psalms are those used on Sundays, the chapter is proper and the hymn Audi, benigne Conditor. The Suffrage of the Saints is sung after the collect of the Sunday. At Compline the Dominical preces are sung.

In the 'liturgical books of 1962' Mattins is cut down to three lessons as usual with all of St. Basil getting the proverbial 'chop'. At Lauds the Suffrage of the Saints is omitted. At Prime the psalms are 53 and the first two stanzas of 118, the Domincial preces are omitted. At Mass the second and third collects are omitted. The dismissal is Ite, missa est. At Vespers the Suffrage of the Saints is omitted and at Compline the Dominical preces not sung.

Pardon my ignorance, as I am only beginning to read through your very informative blog. Why are the psalms for Prime different in the 1961 and the 1911/1913 breviaries?

During Septuagesima and Lent Ps. 50 was sung as the first psalm at Sunday Lauds with 117 in second place transferred from Prime. The psalm it replaced at Lauds, in the case of pre-1911 Ps.92 and in post-1911 Pss. 92 & 99 were transferred to Prime.

So between 1911 and 1961 one had four psalms at Sunday and ferial Prime during Septuagesima and Lent (in the ferial Office the first psalm of Lauds displaced by Ps. 50 was transferred as on Sundays.)

In the 1961 Breviary this is simplified and there is no transfer of any psalms from Lauds to Prime. Dominical Prime in Septuagesima and Lent has Ps. 53, 118(i) and 118(ii). This was the arrangment for festal Prime hitherto and so appears rather strange to me at least.

I have not seen any commentary from the reformers on why the changes were made in 1961.

I hope that is of some help.