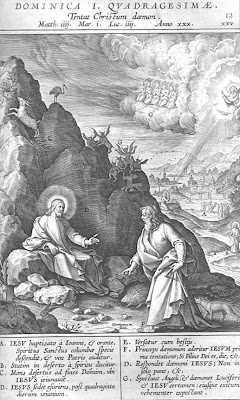 The First Sunday of Lent is a semi-double of the first class. No feast can take precedence over such a Sunday. The Pars Verna, Spring volume, of the Breviarium begins with Vespers on the Saturday before this Sunday.

At Mattins the invitatory is Non sit vobis and the hymn Ex more. These are used throughout the first four weeks of Lent. The antiphons given in the Psalter for Sundays are used. As usual Mattins has three nocturns and nine lessons. In the first nocturn the lessons are from the Second Letter of St. Paul to the Corinthians. In the second nocturn they are from a sermon on Lent by St. Leo the Great and in the third nocturn the lessons are a homily of St. Gregory the Great on St. Matthew's account of the tempation of the LORD in the desert. As in Septuagesima there is no Te Deum but a ninth responsory.

Mass is sung after Terce. In all Masses de Tempore, of the season, from Ash Wednesday the deacon and subdeacon wear folded chasubles, planetis plicatis, instead of dalmatic and tunicle. Folded chasubles are a truly ancient feature of the Roman liturgy and date from the time that the planeta/paenula or chasuble was the common form of dress at liturgical functions. The chasuble was, and indeed should be, a very full garment. When the subdeacon needed to take the Epistolarium to sing the lesson originally the chausble was folded up at the sides to allow his arms free movement. Eventually, for reasons of practicality, the chasuble was taken off completely and ended up being folded, or simply made short, at the front. The subdeacon resumes his chasuble after he has received the celebrants blessing. The deacon takes off his chasuble and, originally folded it length ways and draped it across his shoulder over his stole. In later times due to the weight of embroidery and stiffness of fabric a 'broad stole' replaced the folded over chasuble. As he assists the celebrant throughout the Mass he does not resume his chasuble until after Communion. When folded chasubles are worn the organ is not played. 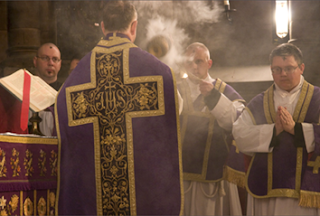 In this photograph from St. Clement's Church the celebrant is being censed at the beginning of Mass. The deacon and subdeacon are wearing folded chasubles.

Here the deacon has removed his chasuble and is wearing the 'broad stole.'

At Mass there is no Gloria. The second collect is A cunctis, the third Omnipotens (for the Living and the Dead), a Tract is sung after the Gradual, the Credo is sung, the preface is of Lent and the dismissal Benedicamus Domino.

Vespers are of the Sunday, sung at the normal time. The antiphons and psalms are those used on Sundays, the chapter is proper and the hymn Audi, benigne Conditor. The Suffrage of the Saints is sung after the collect of the Sunday. At Compline the Dominical preces are sung.

In the 'liturgical books of 1962' Mattins is cut down to three lessons as usual. At Lauds the Suffrage of the Saints is omitted. At Prime the psalms are 53 and the first two stanzas of 118, the Domincial preces are omitted. At Mass the ministers wear dalmatic and tunicle, as in Septuagesima, the second and third collects are omitted. The dismissal is Ite, missa est. At Vespers the Suffrage of the Saints is omitted and at Compline the Dominical preces not sung.

The art at the top of the post is Jerome Nadal's interpretation of the Gospel for this Sunday.