The Ascension of the LORD 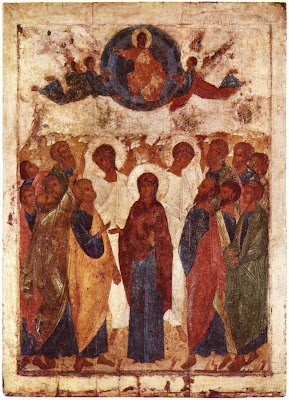 The feast of the Ascension of the LORD is a double of the first class with a privileged octave of the third order.

The Office began with first Vespers yesterday afternoon. The antiphons were proper. Four pluvialistae in pariti assist the Hebdomadarius at Vespers and Lauds. At Mattins the invitatory is proper: Alleluia, Christum Dominum ascendentem in caelum, Venite adoremus, alleluia. The hymn Aeterne Rex altissime is sung. In the first nocturn the lessons are taken from the beginning of the Acts of the Apostles, in the second nocturn they are from a sermon of St. Leo and in the third nocturn a homily from St. Gregory. At Lauds the antiphons are those sung at Vespers and the hymn is Salutis humane Sator.

At the Hours Sunday psalms are sung, Prime is as on feasts (Pss. 53, 118(i) & 118(ii). At Prime the verse Qui scandis super sidera is sung in the short responsory today and until the Vigil of Pentecost. Hymns (with the exception of Salutis humane Sator) have the Ascension Doxology and are sung in tone 4.

Second Vespers are the same as first except for the versicle and response and antiphon on the Magnificat.

The icon is by the great Russian iconographer Andrei Rublev and featured on Wikipedia.
Posted by Rubricarius at 07:01