Today, the Vigil of Penetecost, is one of the most sublime of all days in the Liturgical Year. The Vigil is a semidouble of the first class.

The ceremonies before Mass, very similar to Holy Saturday, are very beautiful but will, sadly, only be celebrated in a handful of places around the world. At the time of blogging I know of one to be held at St. Gertrude the Great in Ohio (from which the images come), one in the Philippines and one in London.

At Mattins the invitatory, hymn, psalms and antiphons are from the feast of the Ascension. The lessons in the first nocturn are the Incipit of the Apostle Jude, in the second nocturn the lessons are from a discourse of St. Augustine to catechumens on the Creed and St. Augustine sermon s 74 & 75 on St. John's Gospel from the third nocturn. At Lauds the Sunday psalms are sung as on the previous Sunday but without commemoration of the Octave. A commemortion of St. Felix is sung but the Commemoration of the Cross is omitted.

At the Little Hours the hymns are sung with the Doxology of Ascensiontime to Tone4. A white antependium etc. is on the choir altar covering a violet one which in turn covers a red one. The candles are not lit. At Prime the first entry in the Martyrology is that of the great feast of Pentecost. After None the white antependium is removed. The altar has no flowers or ornaments decorating it and the candles remain unlighted until Mass.

The celebrant in violet chasuble, assisted where possible by deacon and subdeacon in violet folded chasubles comes to the altar preceded by acolytes without candles. The celebrant kisses the altar at the centre and goes to the epistle corner. The celebrant begins reading, in a low voice, the first of six prophecies at the missal. Meanwhile a lector comes to a lectern in the middle of choir accompanied by the 2nd MC, reverences the altar and choir and then sings the first prophecy. The celebrant and ministers may sit after reading the prophecy returning to the altar as the lector finishes chanting the same. After the prophecy has been sung the celebrant sings Oremus, but unlike Holy Saturday without Flectamus genua and Levate, and sings the first collect Deus, qui in Abrahae. 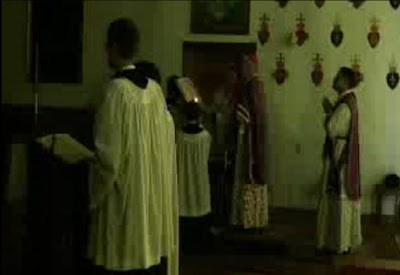 (A lector is before the book medio chori having sung a prophecy. The bishop, at the faldstool, sings a collect. Note the deacon wearing a folded chausuble.)

During the sixth prophecy, if there is a font, the acolytes light their candles on the credence table. A server lights the Paschal Candle and holds it near the credence. The celebrant goes to the sedilia and removes the chasuble and maniple and puts on a violet cope. A procession is now made to the Baptistery. The Paschal Candle bearer leads followed by Crucifer between acolytes. The choir sings Sicut cervus.

At the entrance to the Baptistery the collect Concede, quaesumus is sung (as opposed to Omnipotens sempiterne Deus sung on Holy Saturday). Everything then is done to bless the font as on Holy Saturday with the solemn blessing of the water and infusion with Chrism. During the blessing of the font cushions are laid in the sanctuary for the celebrant and ministers to prostrate on.

When the procession enters the sanctuary the candle bearer takes the Paschal Candle back to the sacristy and extinguishes it. The Crucifer and acolytes go to the credence. The cantors kneel in the middle of the choir. The celebrant and ministers go to the sedilia and removes their vestments. They then prostrate on the cushion before the altar, all others kneel. After the invocation Peccatores the celebrant and ministers rise and return to the sacristy where the celebrant vest in red. Meanwhile servers remove the violet antependium etc. and vest the altar for festal Mass. Where there is no font after the sixth prophecy the cushions are laid on the altar steps and the Litany follows. 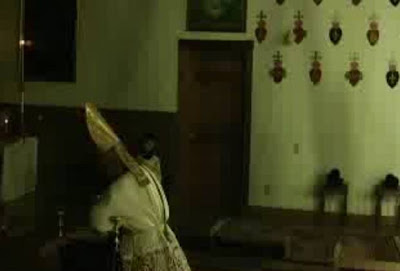 (The bishop, without cope, and wearing the golden mitre kneels at the faldstool during the Litany of the Saints)

As the choir sing Agnus Dei the procession returns to the sanctuary. Mass follows as usual except, like Holy Saturday, it has no introit. During the Gloria the bells are rung. There is only one collect. At the Gospel the acolytes do not carry candles. The Creed is not sung. The preface, communicantes and Hanc igitur are of Pentecost. 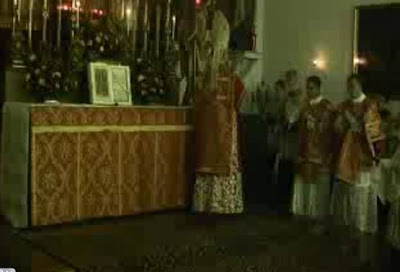 (The bishop is incensed by the deacon. Note the Pontifical Canon in the centre of the altar.) 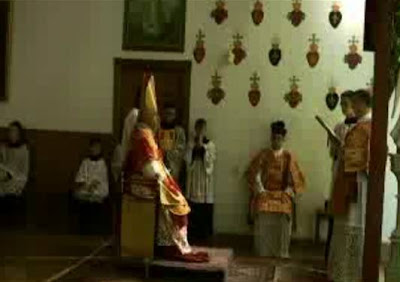 (The Epistle. The train from the bishop's choir cassock may be seen) 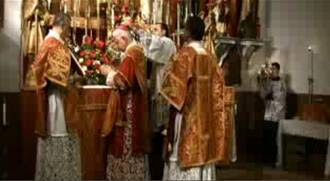 In the 'liturgical books of 1962' the Vigil of Pentecost has been excoriated. At Mattins the ferial psalms are used, there is but one nocturn of three lessons. At Lauds and the Hours the ferial psalms are sung, there is no commemoration of St. Felix. The prophecies and blessing of the font are all gone. The Vigil ceremonies were supressed in churches where the, optional, 1952 form of the Easter Vigil was introduced and universally in 1956 with the New Order of Holy Week. As no one has argued that the times of the Pentecost Vigil were putatively wrong its reason for suppression was lest it reminded the faithful of the traditional Ordo. Mass has the introit added (previously this was only used in private Masses, all else has been cast aside.

Rubricarius has an old Newsletter of the SSPX in Britain, with a prefatory letter from the then District Superior, Fr. Edward Black, dated 5th May 1981. It is an interesting read, the Calender for June clearly shows pre-1962 praxis with the Octaves of the Ascension, the Nativity of St. John the Baptist, Corpus Christi and the Sacred Heart all being celebrated. However, most interesting and poignant for today, on the rear cover the timetable for the Vigil of Pentecost, Saturday 6th June 1981 at St. Michael’s House, Highclere, Berkshire:

I doubt if it would be worth visiting Highclere today.
Posted by Rubricarius at 07:05

Email ThisBlogThis!Share to TwitterShare to FacebookShare to Pinterest
Labels: Vigil of Pentecost

We have been told by our priest to “ take good note of these tips, as these postions:
- are the custom in Mass centers across the world – are loaded with liturgical significance – and ensure a more beautiful and harmonious public worship of the Church.”

As things are now going, maybe in a year or two you will get a very well done Novus Ordo Missae in Latin at Highclere, that will put even EWTN to shame.

Anonymous the First: The rubrics of the Missal presume any faithful present at a Low Mass kneel for everthing except the two Gospels.

The custom is that at sung functions the faithul follow the, liturgical, choir. Again the custom is to stand when singing.

Where did the rules you describe come from?

Thank you for your comments. I personally do not remember having to follow Mass in this fashion in the sixties. Such nonsense does make the NOM a viable alternative.

These rules have been laid down by the "Prior" of SSPX Bombay, part of the SSPX Asia District.

"These rules have been laid down by the "Prior" of SSPX Bombay, part of the SSPX Asia District."

Not surprised. Some SSPX priests like to make their own rubrics as they go along. Unfortunately, since a lot of people consider them to be perfect models of the "old rite", it is the ones who faithfully follow the authentic customs and rubrics of the TLM who end up getting excoriated for NOT being correct!