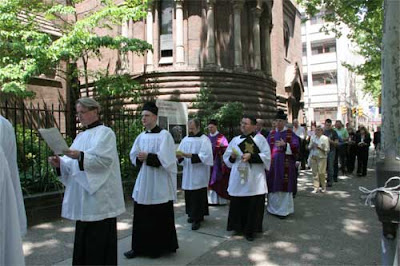 Today is the double rite feast of St. Peter Celestine. It is also Rogation Tuesday but the feria is not commemorated in the Office today. St. Peter Celestine was born in 1221 and became a Benedictine. Attracting many followers these later became known as Celestines from the name St. Peter took after being elected Bishop of Rome only holding that office for a few months before resigning. He died May 19th 1296.

At the Little Hours the Paschaltide Doxology and tone is used for the hymns. At Prime in the Martyrology the first entry is for the Vigil of the Ascension, the short lesson is Fungi sacerdotio for a Confessor-Bishop.

Mass follows Terce. The Gloria is sung the second collect is of the Rogations (from the Mass Exaudivit), the third collect for S. Pudentiana.

Where the Rogation Procession takes place and there is only one Mass this takes place after None as described in yesterday's post. The Mass Exaudivit is sung with ferial tones for the prayers and preface. The second collect is of St. Peter Celestine, the third of St. Pudentiana and Benedicamus Domino sung as the dismissal.

At Vespers a commemoration is made of the following feast of St. Bernardine of Sienna.

Following the 'liturgical books of 1962' St. Peter Celestine is reduced to a third class feast of three lessons. There is no commemorated lesson at Mattins of St. Pudentiana. At the Little Hours the Paschaltide Doxology and tone are not sung at the hymns, the short lesson at Prime is of the season. At Mass (without a Procession) there is no commemoration of the Rogations but of St. Pudentiana in said Masses only. Where the Procession takes place the same rules as yesterday apply so the Litany may be sung in the vernacular (the petitions not duplicated) and the 'preparatory prayers' chopped from the beginning of the votive Mass etc and Ite, missa est as the dismissal. Vespers are without a commemoration. There is no longer any obligtion for clergy to pray the Litany if they do not take part in a Procession.

The photograph is from a series of a Rogation Procession at St. Clement's Episcopal Church, Philadelphia. A Google image search showed many Anglican Rogation Processions (but not using the Roman Rite!) but where are the Catholic ones?
Posted by Rubricarius at 07:01

On two occasions these past four months I have Novus Ordo Nuptial Masses. They were conducted in English. In both of them there was no Confiteor. The Kyrie Eleison was recited by a layman. The Apostles Creed was recited at both Masses.The recital of the Agnes Dei was led by a layperson.

Is this how it is supposed to be done?