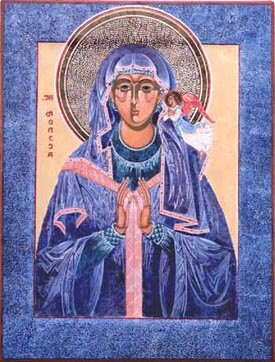 Today is the feast of St. Monica, Widow. The feast is of double rite. Today is also the sixth day in the Octave of the Solemnity of St. Joseph Patron of the Universal Church. (Not, of course, to be confused with the modernist San Giuseppe Comunista).

Saint Monica was born in Roman Africa about 331 and brought up a Christian. She later married a pagan whom she converted to Christ by her virtues. She gave birth to three children including St. Augustine of Hippo. She died in the port of Ostia in 387. Her relics repose in the Church of Sant'Agostino in Rome.

At Mattins in the first nocturn the lessons appointed for yesterday, the third Sunday after Easter are read: Incipit liber Apocalypsis beati Joannis Apostli with the responsories of the Sunday. The lessons in the second and third nocturns are from the feast. At Lauds a commemoration of the Octave of St. Joseph is made. Hymns of Iambic metre of course have the Paschaltide Doxology.

Mass follows Terce. At Mass the Gloria is sung, the second collect is of the Octave of St. Joseph, the Credo is sung and the preface is that of St. Joseph.

Vespers are from the chapter of the following feast of St. Pius V with a commemoration of St. Monica and of the Octave of St. Joseph.

Following the 'liturgical books of 1962' St. Monica is stripped down to a third class feast of just one nocturn of three lessons. The Octave has been abolished. The Paschaltide Doxology is not sung. At Mass there is one collect, no Creed and the common preface is used. Vespers are of the feast without any commemoration of the following Office.

Art: An icon of St. Monica from Bridge Building Images.
Posted by Rubricarius at 07:01

Canon Law #1271 states that the sanctuary lamp should burn continually day and night before the tabernacle in which the Blessed Sacrament is reserved.
+DM