Paschal Mattins and the Octave 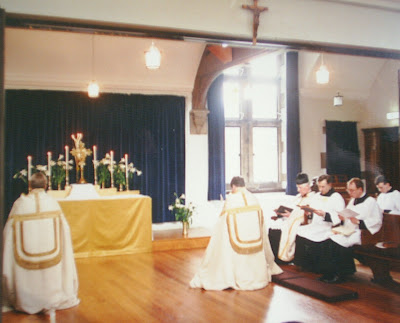 The high point of Holy Week in most medieval rites, and certainly in the Byzantine rite to this day (or, to be pedantic, this Saturday evening!) was the celebration of Paschal Mattins - Mattins of the Resurrection of the LORD.

In typical English praxis, such as Sarum, the Lenten array was removed from the statues and images after Compline on Holy Saturday. Before the bells rang out for Mattins the clergy went to the Sepulchre and then the Cross was 'raised' to the singing of the antiphon Christus resurgens. A ceremony of adoration of the Cross, just as on Good Friday morning, took place before a triumphal procession around the church. I shall write some more about the ceremonies of 'elevatio' in due course but it is interesting to note that they still take place, despite the liturgical heteropraxis of the last sixty years, in part of Eastern Europe. An example from contemporary Germany (Heilege Grab - the Holy Grave) may be found here and I am grateful to a friend from Poland for sending me this synopsis of Polish Sepulchres. Of pariticular note is that the Polish editions of the liturgical books had 'depositio' ceremonies and the corresponding 'elevatio' ones printed as part of the rites until very recently (e.g. Cantionale Ecclesiasticum, Cracow, 1925 in my collection).

Roman rite Mattins was sung on Saturday evening (and of course on other days within the Octave). The solemn tone is used for Deus in adjutorium. The invitatory is Surrexit Dominus vere Alleluia and psalm 94 is sung to a lovely tone 6. Mattins consists of one nocturn. The Gospel fragment is St. Mark 16: 1-7 and is followed by a homily of St. Gregory the Great. The two responsories Angelus Domini descendit and Cum transisset sabbatum are famous and intimately connected with the Quem quaeritis ceremonies and indeed the development of Western drama (vide the excellent book: Hardison, O.B., 'Christian Rite and Christian Drama in the Middle Ages', The John Hopkins Press, Baltimore, 1965). During the second responsory the cantors and the celebrant don copes the principal one pre-intones the Te Deum. The Te Deum is then sung and, where it is the custom the bells ring throughout. Lauds follow immediately and have a series of beautiful antiphons: Angelus autem Domini, Et ecce terraemotus, Erat autem, Prae timore autem ejus and Respondens autem Angelus all taking up the theme of the Angels, earthquake and empty tomb. The chapter, hymn, versidel and response are replaced by the Haec dies. If one has the opportunity listen to the setting by the English composer John Sheppard do so (Hyperion CDD22021). After Haec dies the altar is censed in the usual manner at the Benedictus and the solemn Regina Caeli sung at the end of Lauds.

The Hours for Pascha and its octave have a special form. They do not have antiphons but the psalms are sung to a haunting Tone2. Again the hymn etc. are replaced by. At Prime the Martyrology is resumed after its absence during the Triduum. Before the entries for the following day the following is sung to the Passion tone: Hac die, quam fecit Dominus, Solemnitas solemnitatum, et Pascha nostrum: Resurrectio Salvatoris nostri Jesu Christi secundum carnem. The day, moon etc then are announced as normal.

Mass follows Terce. At the aspersion Vidi aquam is sung and water taken from the font the previous day used. At Mass the Gloria is sung, the sequence Victimae Paschali precedes the Gospel, the Credo is sung, the Paschal preface and the Communicantes and Hanc igitur are proper.

Vespers are of the feast with the same antiphons as sung at Lauds. In many uses a procession was made to the font during Vespers and it is common to find texts in books marked ad fontes. Somewhat ironically the editio typica of the Caeremoniale Episcoporum published in 1985 has a rubric (371) authorising Baptismal Vespers where it is the custom although no texts are given. There is evidence that in Rome a particularly solemn form of Baptismal Vespers took place with some antiphons so ancient they were never translated from the original Greek.

Both Monday and Tuesday in the Octave are doubles of the first class and the liturgy is essentially the same as that of Sunday with proper texts. Wednesday, Thursday, Friday and Saturday are semidouble days within a privileged octave. The antiphons are not doubled at Mattins, Lauds and Vespers and at Mass the second collect is for the Church or of an occurring feast.
Posted by Rubricarius at 17:38

How different are the Novus Ordo Holy Week ceremonies from all the Tridentine ones you have so well described?

Anonymous,
I'll make that a subject of a post rather than responding to your question with a comment.

Basically the services are similar (in theory at least following the Latin editions of the liturgical books) but some of the oddities in the 1955-62 rite e.g. not wearing vestments for most of Good Friday have been reversed although they manage to get the colour wrong (not that red was not used on Good Friday in many medieval uses, and indeed the Ambrosian rite, but in the medieval uses the red was a dark ox-blood not bright vermillion with gold braid.)