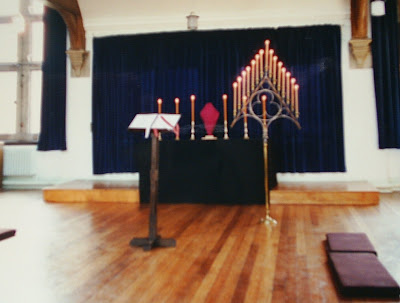 Tenebrae for Good Friday takes place in the late afternoon or evening of Maundy Thursday. The service is structurally the same as that sung for Maundy Thursday and the differences will be noted.

The choir altar is as it was after stripping with six candlesticks and altar Cross veiled now in black (preferably) or violet. [Note. The altar stone used in the Union Debating Chamber was laid on a table supported by trusses and chairs. The plain black covering is not an antependium of any sort but merely to disguise the supporting structure.]

At Mattins the first antiphon is Astiterunt reges. The psalms are strictly proper. After the last verse of each psalm a candle is exstinguished on the hearse. The Lamentations of Jeremy form the first nocturn lessons. The second nocturn lessons are again from St. Augustine on the psalms and in the third nocturn from St. Paul to the Hebrews.

At Lauds the antiphon on the Benedictus is Posuerunt, sung to the same tone as last night and doubled. Exactly the same ceremonies take place as last night. When the Christus factus est is sung Mortem autem crucis is added.

After Tenebrae in Cathedral and larger churches the Ceremonial Washing of the Altars took place. The bare mensae were washed with a mixture of water and wine and the surface scoured with brushes and dried with towels whilst Diviserunt and psalm 21 were monotoned. After this service Christus factus est etc is added. 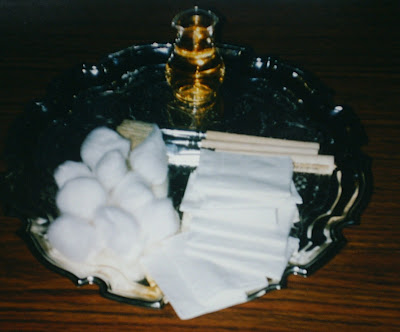