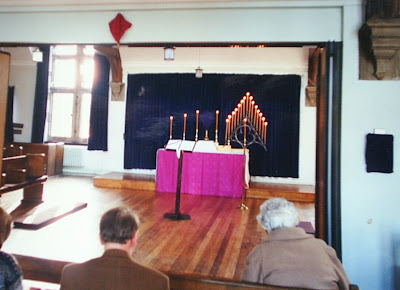 Maundy Thursday is a double of the first class.

During the late afternoon (following the practice in Rome),or evening, the service of Tenebrae is sung. Tenebrae is simply Mattins and Lauds, as usual anticipated, of the following liturgical day but the Office of the Triduum shows signs of antiquity and has developed a ceremonial extinguishing of candles that mimetically represent the desertion of the LORD by his disciples and the days of darkness - hence the name.

On Spy Wednesday evening the altar is vested in violet antependia and the Blessed Sacrament removed if It is present on the choir altar. The altar cross is veiled in violet and the candlesticks, the plainest set used on Good Friday, bearing candles of unbleached wax.

In Rome Tenebrae in the Papal Chapel was celebrated very early so the rays of the setting sun would pass through a window of the Sistine Chapel. The Caeremoniale Episcoporum mentions Tenebrae starting progressively later each day of the Triduum. In practice the service 'works best' if it ends in near darkness.

The photograph (of a photograph) above was taken just before the singing of Tenebrae on Spy Wednesday evening in the Union Debating Chamber of the University of Durham in 1995. It part of a series of photographs of the Triduum celebrated by a good friend of this blogger the Rev. Dr. T.C.G. Glover, JCD. Dr. Glover celebrated the full Office of the Triduum including all the Horae Minorae from the mid-1980s until 1995 on his retirement. More photographs will be posted over the Triduum.


In the sanctuary in about the place where the Epistle is sung is placed the Tenebrae hearse. The hearse, for the Roman rite, bears fifteen candles of unbleached wax. Six candles of unbleached wax are lit on the altar. The choir enters, seniores ante inferiores, take their places and kneels to say Aperi, Domine. When the choir rises the sign of the Cross is made as the cantors intone the first antiphon of Mattins, Zelus domus tuae is intoned (in full) and the first psalm Salvum me fac, Deus intoned. At the end of the psalm (there is no Gloria Patri during the Triduum) the lowest candle on the Gospel side of the hearse is extinguished. Before the 1911-13 reform the chant books had a special cadence at the end of each psalm, a drop of a fourth, which presumably was an audible indication for the acolyte to extinguish a candle. After the first three psalms there is a versicle and response and a silent Pater noster. During the Triduum there are no absolutions and blessings at Mattins.

The follows the Lamentations of Jeremy the Prophet as first nocturn lessons. These are from the OT book and have verses based on a Hebrew acrostic. The first verse thus begins with 'Aleph'. The verses have several special tones in plainsong and have been set to polyphony by various composers. A responsory follows the first lessons as usual at Mattins. After the third responsory the second nocturn begins and has lessons from St. Augustine on the psalms. The third nocturn has lessons from St. Paul to the Corinthians on the foundation of the Holy Eucharist. At the end of Mattins the Tenebrae Hearse has five candles exstinguished on the Gospel side and four on the Epistle side with six remaining lit candles.

Lauds follow immediately. After each psalm of Lauds a further candle is extinguished so that after the last psalm only the candle on the summit of the hearse is still alight. After the last antiphon is repeated a versicle and response follow. Then the antiphon on the Benedictus is intoned, for Maundy Thursday this is Traditor autem dedit eis signum, dicens: Quem osculatus fuero, ispe est, tenete eum. The concept of the betrayal of Judas is key to the day. The plainsong for the Benedictus is a haunting tone 1g. During the last six verses each of the altar candles is exstinguished. All other lamps in the church are now also extinguished. During the repetition of the antiphon the MC takes the candle from the hearse and places it on the mensa at the Epistle corner of the altar. All kneel and the choir now sings Christus factus est pro nobis obediens usque ad mortem. During this antiphon the MC hides the lit candle behind the altar. A Pater noster is now said in a low voice by all and then psalm 50 the Miserere is chanted in a subdued voice. This has been adapted by many composers into polyphonic masterpieces, perhaps the most famous being by Allegri. The Miserere was part of the ferial preces of Vespers until 1911-13. After the Miserere the collect Respice is chanted by the Hebdomadarius. Then a strepitus or noise is made traditionally by banging books against the stalls. Practical Tip: DO NOT bang decent books against the stalls, they are rare enough already - bash the Hell out of a '62 book instead!

After the strepitus the MC brings the candle and returns this symbol of the light of Christ to the top of the hearse. It either remains there or is taken by the MC ahead the procession as the choir processes out after Sacrosanctae.

Please read the section on Tenebrae from the series by Signor Gregory DiPippo here.

In the 'restored' rite found in the 'liturgical books of 1962' the symbolism of the service is shattered at it takes place in broad daylight. A.J. MacGregor's 'Fire and Light in the Western Triduum' conclusively demonstrates that Tenebrae never took place in broad daylight. The Miserere is omitted from all the Offices, the cermony with the candle and the strepitus are gone.
Posted by Rubricarius at 19:00

"the cermony with the candle and the strepitus are gone..."

Well, not in the SSPX's Tenebrae in Manila

There is a lot of liturgical pick 'N' mix when it comes to Spy Wednesday Tenebrae. Did the Manila celebration have the Miserere?