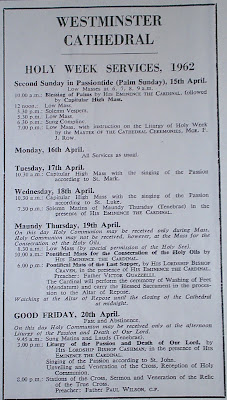 Click image to enlarge
In contrast to 1939's 'glorious' praxis of the last post the above is taken from 'The Tablet' of April 14th, 1962. Rather oddly the full week's services were not included in the advertisement. Perhaps the Canons were too ashamed of what they were doing by then.

We can note that Palm Sunday has been re-branded 'Second Sunday of the Passion' for some peculiar reason. Interesting too is the didactic instruction at the evening Low Mass. Time does not permit to go into any detail of ritual theory but basically when a sacred mystery has to be broken down by such instruction to enable any understanding it clearly no longer fulfills its role.

My understanding is that the daily cursus of the Office was still taking place at Westminster in 1962 as the late Mgr. Francis Canon Bartlett, of happy memory, told me that it was Cardinal Heenan who stopped that venerable practice. We can presume Vespers would have been chanted in the afternoon (from Lent 1961) of Monday, Tuesday and Wednesday.

On Wednesday evening we come to a notable peculiarity. According to the Pius XII re-ordering of Holy Week the only occasion Tenebrae could be legally held in the evening was in Cathedral Churches where the Chrism Mass was to take place the next morning. According to the 'liturgical books of 1962' this becomes modified with the prohibition on the anticipation of Lauds so that only Mattins may be anticipated in the same, specific, circumstances. Of course a websearch of Holy Week services this year will show many 1962-ists having Tenebrae in the evening in non-Cathedral churches but there again honesty and integrity are not hallmarks one generally associates with 1962-ists and their revisionism of liturgical history. So at Westminster on Spy Wednesday 1962 Cardinal Godfrey would have presided at Mattins. The pontifical ceremonies of Holy Week were revised too so at Mattins instead of the Cardinal entering the choir with his cappa magna let down and covering his head with its hood when seated the 1957 Ritus Pontificalis OHSI now had the Cardinal carry his cappa folded over his arm and wear his biretta instead.

In comparison to such changes what happens next is absurd. As will be posted next week for the office of Tenebrae a triangular candelabrum bearning fifteen candles of unbleached wax, called the hearse, is set before the choir altar in the place where the subdeacon sings the Epistles. In the Roman rite after each of the nine psalms of mattins and five psalm-units of Lauds a candle is extiguished. So at the end of the first nocturn the lower two candles on the left (the Gospel side) of the hearse will have been extinguished and the lowest on the right hand side. This process continues so that after the last psalm of Lauds a single candle remains at the centre of the hearse representing the Lord desserted by his disciples. During the Benedictus the six altar candles are progressively extinguished, along with all the lamps. The single candle is then hidden whilst the Miserere is chanted - but a full description of that next week.

However, at Westminster in 1962 Mattins only would have been sung as indeed the notice states. Nine candles would be extinguished but no more. The choir and Cardinal depart and the other six candles are left on the hearse and the six altar candles - presumably burning all night for Lauds to be resumed in the morning!! No mention of Lauds is made in the Westminster programme for Maundy Thursday morning.

The now separate Chrism Mass takes place on Maundy Thursday morning with the omission of In principio. In the evening there is the new 'Mass of the Last Supper' celebrated by an auxillary coram Cardinali. The Mandatum is now generally celebrated after the Gospel of the Mass. In that Mass the Creed is omitted, Agnus Dei changed, Benedicamus Domino replaces Ite, missa est, the blessing and In principio are cut too. Note the Cathedral closing at midnight.

On Good Friday Mattins and Lauds are sung in the morning - Tenebrae is no longer an appropriate term, perhaps someone should have suggested something else. Extinguishing the altar candles is somewhat difficult due to a marked absence of candlesticks. The replacement for the Mass of the Pre-Sanctified takes place in the afternoon.

Presumably Holy Saturday was similar with Mattins and Lauds in the morning and the Easter Vigil in the evening.

I deeply appreciate the timetables for 1939 and 1962 being posted, one after the other. It quite often takes something "visible" for people to start asking, "What DID happen?"

While they may not understand the reasons for the gutting of the Roman Rite by those acting in the name of so-called "restoration", the layman in 1955 would be able to ask himself, "Now, why do we no longer do x,y,z?"

Placing the traditional rites of Holy Week side-by-side with what was done in the 1950s may very well be the most constructive tool in bringing about a true understanding of what happened.
+DM